United States boxing legend Mike Tyson has denied a connection with the cryptocurrency project Fight to Fame, which is suspected of financial fraud. He announced it in a Twitter post on Aug. 15:

The information about the project first appeared in the media back in April this year. Why, however, it was only recently that Tyson publicly denied its involvement in the activities of Fight to Fame is still unclear. In order to get to the bottom of the story, Cointelegraph conducted an investigation.

Fight to Fame was brought to media attention on Aug. 13 as Cointelegraph reported that Tyson had headed the sports and competition committee of the previously unknown project. The information originally appeared on VentureBeat.

Fight to Fame is an entertainment platform for promoting new sports stars through films and video games, and it used the former boxing champion Mike Tyson as its cover star. Meanwhile, the project utilizes a blockchain to provide a transparent and secure decentralized ledger.

Project CEO Farzam Kamalabadi and Chairman of Global Operations Tim Smithe planned to conduct an initial coin offering (ICO) and issue a token that fans could use to support the fighters. To make it more appealing, the token was also named after Tyson. Likewise, as was said to a crypto YouTube vlogger, Tim Smithe attributed the idea to the eminent boxing champion. According to Smithe:

“He’s a co-founder. This isn’t like we threw Mike few tokens to say we use your name. This was his idea. He stands with the co-founders.”

The idea that Tyson himself allegedly proposed was not new, though. The founders resorted to the classic Hollywood recipe — charity and a global star’s name to market it.

In an interview with blogger Crypto Beadles that was broadcast on April 13, Smithe shared plans “to host fights in 200 countries.” Thus, it was planned to help talented fighters build a career regardless of financial status or location. Smithe said during the interview:

“When you’re hosting fights in Sierra Leone or Ghana, you’re putting a spotlight on local economy or revitalizing local economy, and more importantly you’re giving kids that would never have a chance, boys and girls, men and women, young and old […] to be in a real global competition.”

The site even contained Tyson’s quotes, but they were soon removed together with the rest of the information. The champion’s role in the project also remains unclear.

Tyson himself chose to remain in the shadows until recently. Only on Aug. 15 did he made a public statement about his involvement with Fight to Fame. The next day, his wife and part-time manager, Lakiha Tyson, told the media that they were discussing the collaboration with the Fight to Fame creators several years ago, but they have made it “very clear” since then that they were not involved with the project.

Tyson’s publicist, Jo Mignano, also confirmed that the boxing star had never been on the Fight to Fame board or directors, and negotiations that ended two years ago have not led to anything. The champion’s family even hired lawyers to protect his rights. On Feb. 12, the law firm Lavely & Spencer sent a number of persons involved in the issue of the Tyson Token cryptocurrency cease-and-desist letters, which demanded them to stop using Mike Tyson’s name, photos and voice. 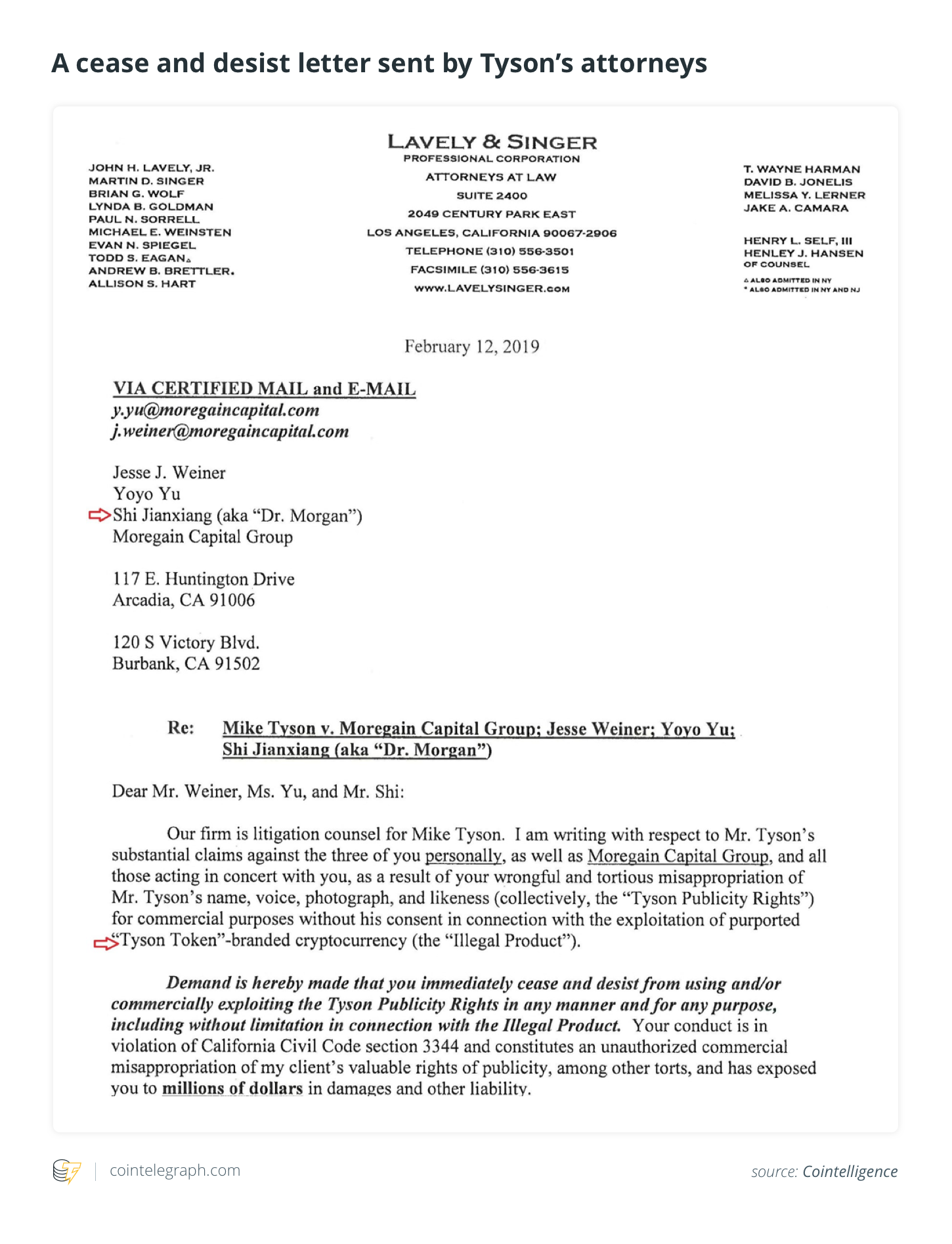 After three months of unsuccessful attempts to reach an agreement, Tyson decided to involve the public. On May 22, his spokesperson contacted the Wall Street Journal, informing the paper that the former champion was not involved in the new project.

Who dragged Tyson into this?

So, who is responsible for all this? The answer is not clear cut. Formally, the roles of talking heads and nominee project managers belong to Kamalabadi, head of the Future Trends International Group investment holding, who has facilitated $20 billion worth of financial deals, and Smithe, who’s said to be a two-time Emmy award winner for television writing and producing. Notably, Smithe isn’t on the lists of the Television Academy’s website.

But it also turned out that several scandalous figures could be behind the boxing-based platform. Among them is Shi Jianxiang, to whom Tyson’s lawyers addressed a cease-and-desist letter. According to the WSJ, Shi is wanted by Interpol and Chinese regulators for the organization of a $5.8 billion Ponzi scheme mainly related to movie ventures.

Judging by the information published in the media and given by Tyson’s wife, it seems that Shi founded Fight to Fame and drafted in the boxing star to advertise the project.

Lakiha Tyson also said that her husband and Shi met back in 2014 on a Paramount movie lot, which resulted in the former boxing champ getting a key role in the martial arts film “Ip Man 3”. Later, in 2017, Shi invited Tyson to collaborate on his new project, Fight to Fame, and shared a detailed business plan that the boxing legend found attractive.

Shi assured Tyson that the project was aiming to gain exposure in the sports entertainment market, and the sale of a Tyson Token would help to increase its capitalization and benefit the boxing legend’s reputation. Lakiha Tyson later admitted that she and her husband didn’t suspect anything and even found the idea interesting:

“He [Shi] was telling us about Fight to Fame. He was talking about how they were going to do something with blockchain, how they wanted to do a Tyson Token, and this was going to be a way to promote Fight to Fame and the idea all seemed pretty cool.”

Tyson’s active involvement in the project began in July last year. It was then, according to his wife, that he signed a preliminary document that served as a confirmation of the agreements between him and Shi within the framework of Fight to Fame. The full contract with all the final terms included was to be signed later, though the Tysons never received it.

Another blow below the belt was a hit by Shi during a Chinese New Year party, when he asked Tyson to give a speech about a sports TV show on camera. The text was approved by his wife in advance, and according to her, did not contain anything that could compromise her husband’s honor:

“Hello, my Chinese friends! I am your friend Mike Tyson. I’ve long heard that ‘WU LING FENG’ is the most influential reality combat television show in China. I am expecting to see you guys in ‘Wu Lin Feng’ as soon as possible, and I also wish a successful co-operation between ‘Fight to Fame’ and ‘Wu Lin Feng.’”

However, at the very last moment, the text was allegedly swapped. Calling his wife and getting an answer that she approved it (Lakiha did not know about the substitution), the boxer proceeded with reading it. The video shows, however, that Tyson was not very familiar with the script, as his speech was stammering when he said:

“Hi everyone! Mike Tyson here, the Chairman of the Organization Committee of Fight to Fame — the global film action star competition. Open to global sports lovers and through our unique ‘Blockchain-Movie-Sports’ business model six plus one sub-committees established by our Fight to Fame organization aim to provide sports enthusiasts a path to become a Hollywood action movie star through decentralized selection and competitions to win champion title in Fight to Fame. I sincerely hope that you will support Fight to Fame and support me.” 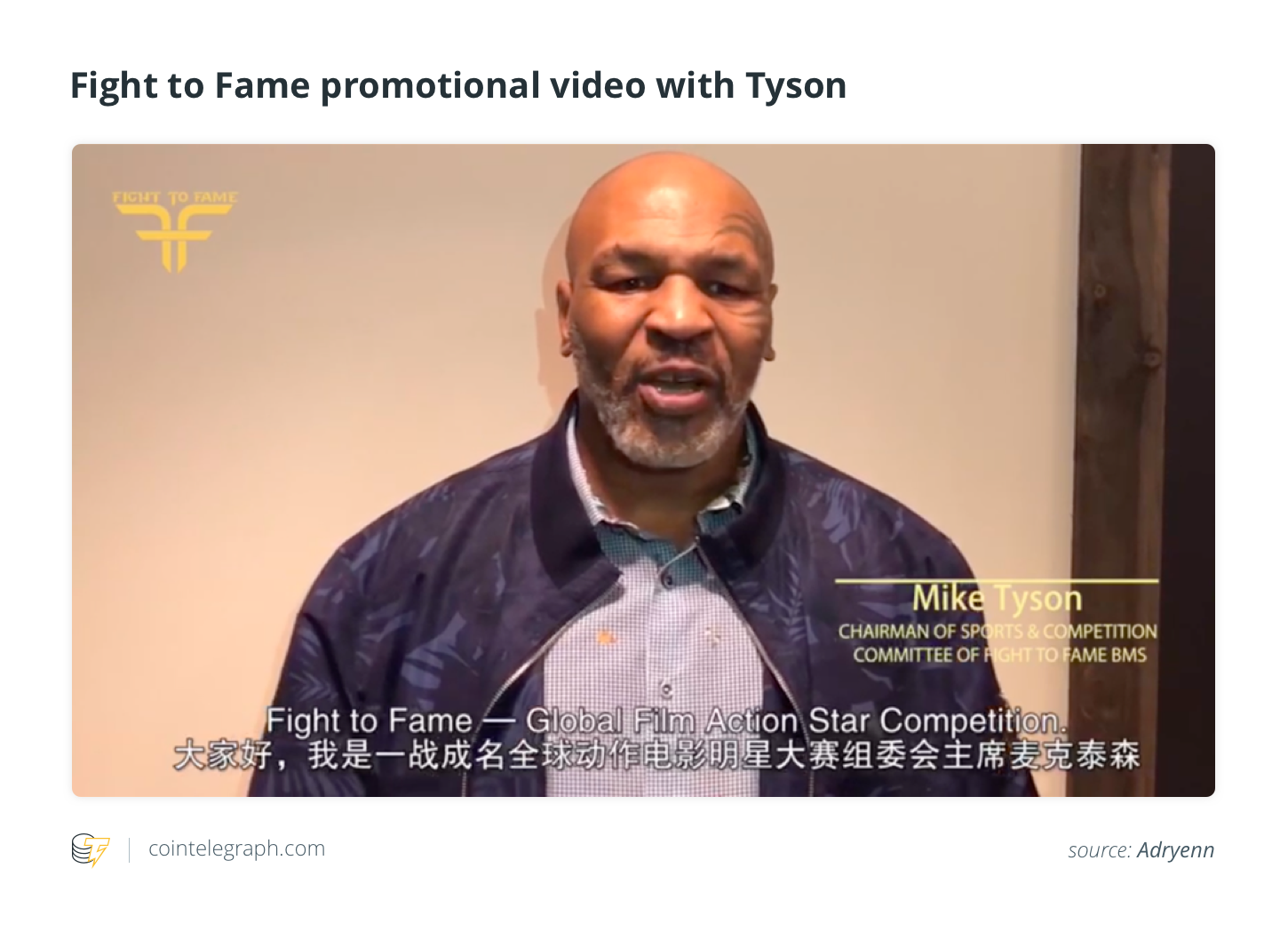 Fight to Fame’s version: Tyson, not Shi, is the co-founder

In an interview with Cointelegraph, Kamalabadi and Smithe presented a different version of what occurred. According to them, Tyson is a Fight to Fame co-founder, as evidenced by the documents signed by him and his participation in the project’s promotion. In addition, the Fight to Fame press service shared with Cointelegraph the confidential partnership agreement signed between the project and Tyson, asking not to disclose its content. However, Cointelegraph is unable to verify the authenticity of the former boxer’s signature. The allegation of the video script text being swapped was also denied by Smithe:

“There was never a script ‘swap’ as the Tyson team alleges. Tyson was aware of what we were filming and the script was made available beforehand. The video was shot in the Fight to Fame offices with full disclosure this would be used to promote the project he had been involved in from its inception.”

The former boxing champion’s statement was a real surprise to the Fight to Fame creators, because for more than a year, according to Kamalabadi, Tyson voluntarily participated in its activities. He added that the story the former champion is telling is “constantly changing,” and his comments contradict each other — for example, the one claiming that the Fight to Fame representatives didn’t respond to Tyson’s attorneys.

In addition, Kamalabadi said that the lawyers themselves might not be aware of the partnership agreement signed by Tyson, therefore, having found out the factual involvement of their client in the project, they could stop further proceedings. According to him:

“Any morally legitimate and legally binding contract cannot be annulled one sidedly upon an irresponsible cease and desist letter from the lawyer, when the lawyer realizes that they were not informed of a previously executed contract by the client, and thus the lawyers themselves ceased and desisted their complaint by dropping the case and not pursuing further.”

Shi’s involvement in the project has also been disproved by the founders. Who negotiated with Tyson and signed an agreement with him then, Smithe seems to be unaware:

“Mr. Shi was previously an advisor for the Asia Entertainment Market, however he is not currently involved in the business structure, which is reflected in all public information filings.”

Likewise, another co-founder, Kamalabadi, claims that all the documents were signed by Tyson before his appointment to the post:

“Early upon my joining I was presented with all documents including the contract and records of ongoing meetings and active participation of Tyson even this year, all indicating to the contrary that the project had the full consent of Tyson.”

It is worth mentioning, however, that the agreement shared by the project press service with Cointelegraph was concluded between Tyson and the Moregain Capital Group, which is owned by the aforementioned Shi. The founders don’t intend on cooperating with Tyson anymore, as Smithe stated:

“At this point in time, we do not plan to continue any relationship with Mr. Tyson. We will, however, continue to clarify any inaccurate or false statements or accusations about Fight to Fame.”

The project has also shared with Cointelegraph short-term plans to open access to the platform for 100 million fighters around the world. Additional investment fundraising through an ICO will not be carried out. Smithe added that the project has enough funds for further development.

History knows many good examples of celebrities directly or indirectly participating in advertising blockchain projects as well as bad cases in which the famous stars incurred reputational or financial losses.

For example, last year, the U.S. Securities and Exchange Commission fined U.S. boxer Floyd Mayweather and music producer DJ Khaled for promoting Centra Tech’s ICO on social media. The total amount to be paid by DJ Khaled comprised $152,725, while for Mayweather, it was $614,775. For rapper T.I., the situation got worse, as he was sued for $5 million after his token fell in price.

The participation in the advertising of dubious blockchain projects has also damaged such stars like Steven Seagal, Paris Hilton and John McAfee. Meanwhile, a video with Tyson can cause him a number of troubles, lawyers suggest. Braden Perry, a litigation, regulatory and government investigations attorney, told Cointelegraph:

“If Tyson simply read what he thought was approved, it likely won’t be significant. If, however, other facts indicate his knowledge and involvement, then the video becomes much harder to explain.”

“Generally in the US all relevant facts can be admitted into the case. So, yes, this video certainly goes against Tyson’s statements. In that world this video will really hurt his chances of proving he was not involved.”

How to Earn Bitcoin for Free

Divs.io 4th Presale Round: Here’s How You...