Stablecoins attempt to be fiat currencies among cryptos. They can be a medium of exchange, a means of storing value and a unit of account. Unlike other digital coins, stablecoins are tied to some kind of stable asset — such as the United States dollar, euro or even gold. Linking to such assets confirms the coin’s stability and mitigating the volatility of cryptocurrencies.

With this type of a token, an equal amount of fiat currency should be stored by the issuing company to back the value of the token. The owner of this token should be able to exchange it for cash at any time.

An idea to make cryptocurrencies stable and tie its exchange rate to a traditional asset appeared in 2012, three years after Bitcoin (BTC) first emerged. The project was called Mastercoin, which was later renamed as Omni.

Now, developers tie stablecoins not only to the U.S. dollar, but also to the euro and the Japanese yen. However, some of these currencies have so far not received as much attention as the most recognized stablecoin right now — i.e., Tether. 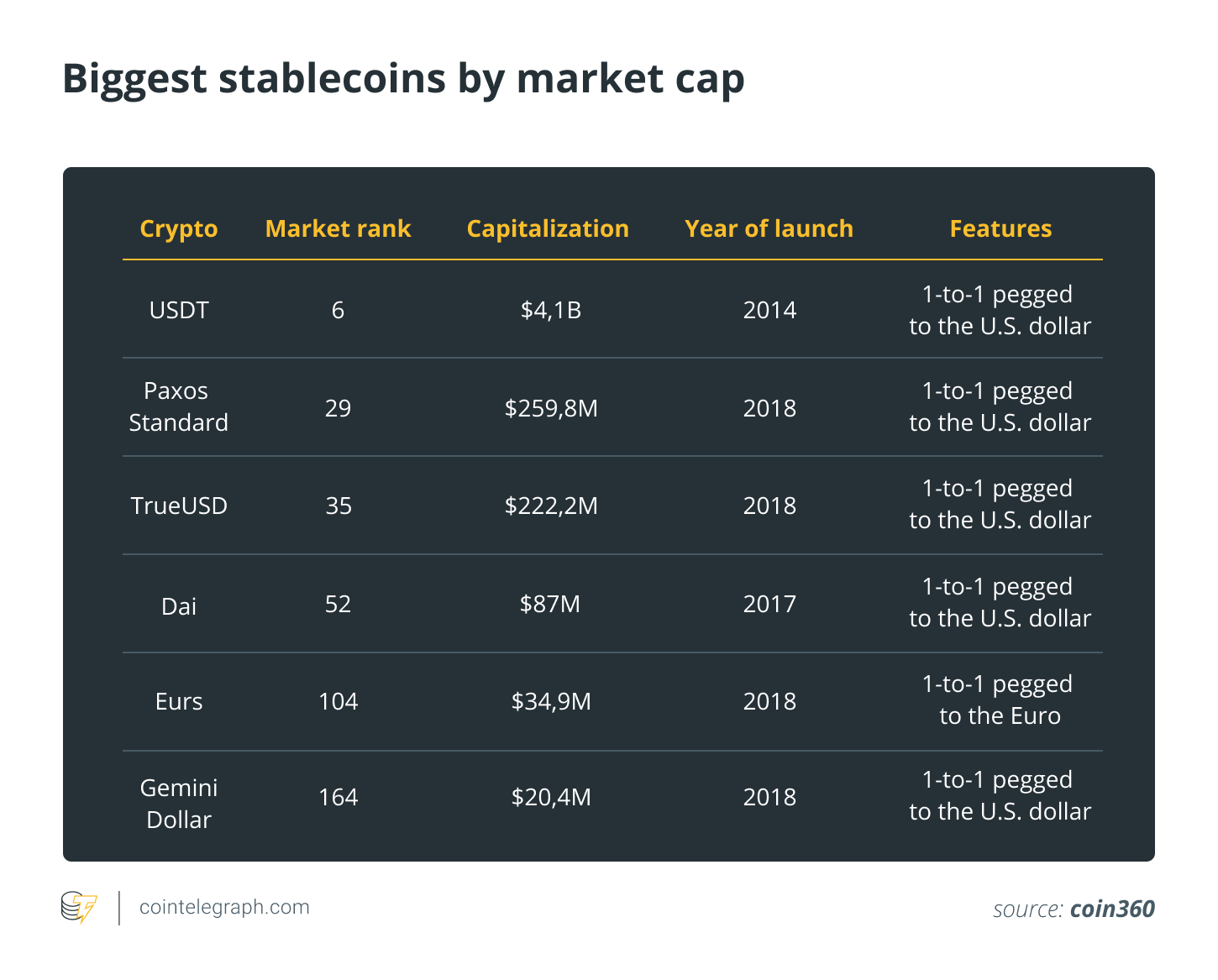 The coin was created in July 2014 under the name “Realcoin” by Starbucks vice president Stanley Hainsworth. Some time after the launch of the project, the cryptocurrency was added to the Bitfinex cryptocurrency exchange. Initially, the companies did not disclose their relationship. However, in 2017, thanks to a leak of documents called the Paradise Papers, the crypto community learned that Tether Ltd. and Bitfinex had the same owners.

Early on Tether struggled to gain popularity among crypto traders. Therefore, in November 2014, the company decided to conduct a complete rebranding, as a result of which Realcoin was renamed as Tether. The managing company and sole issuer of Tether is Tether Ltd. The first block in the Tether network was generated on March 12, 2015.

Related: Tether Stablecoin: Can the Crypto Market Live Without It?

One Tether is one-to-one pegged to the U.S. dollar, and according to the official website, it is fully secured by the monetary reserve of the Tether platform. Most of the Tether coins are issued on the Bitcoin blockchain through the Omni Layer protocol. Tether is one of the most popular cryptocurrencies in the world because Tether is, in fact, not cryptocurrency but digitized fiat money.

But in January 2018, the U.S. Commodity Futures Trading Commission (CFTC) began a lawsuit against Bitfinex and Tether, sa the regulator doubted that the 2.3 billion tokens issued by Tether were indeed backed up by the same amount of dollars.

In 2017, before receiving a subpoena from the CFTC, Tether used the services of the company Friedmann to conduct an audit and published the results. Also, in February 2018, the Bitmex derivatives exchange report included the assumption that Tether does have sufficient reserves to secure all USDT tokens in circulation.

Another confrontation with lawmakers took place in April 2019, when the New York attorney general filed a lawsuit that accused Bitfinex of using Tether reserves to cover losses of $850 million. According to the lawsuit, Bitfinex was unable to establish normal banking relations and invested more than $1 billion in Crypto Capital Corp. The funds are said to have been pooled between corporate and client deposits, and not a single contract has been signed.

Despite the lawsuits and lack of audit, the cryptocurrency capitalization currently exceeds $4 billion, and many investors continue to favor this asset, which means they believe in the security and reliability of Tether.

TrueUSD is backed by the U.S. dollar and represents the first ERC-20 stabletoken built on the Ethereum blockchain. In essence, the TrueToken platform, which is behind TrueUSD, is designed to create tokens with the support of fiat assets.

The project was launched at the very beginning of 2018 after raising $20 million.The company was supported by investors such as Stanford–StartX, Founders Fund Angel, FJ Labs and BlockTower Capital. Unlike other cryptocurrencies, TrueUSD has no upper limit on the issue of tokens, since the concept of its supply directly depends on the amount of dollars in storage.

The main difference between TrueUSD and other stablecoins is the coin’s focus on significantly improving transparency and compliance with legal practice, as it was argued that Tether lacks in that department.

U.S. dollars that ensure TrueUSD stability are held by several trust companies in different bank accounts instead of being managed by the same company. The contents of escrow accounts are published daily, and audits are conducted on monthly basis, which supposedly confirms the one-to-one peg with dollar is in place.

But the most difficult issue, according to the project team, was to convince users of the real reliability of the token. Rafael Cosman, co-founder and chief technology officer of TrueToken, said to Cointelegraph:

“The technical, financial, and legal burdens are all substantial – but the biggest challenge of all is earning and maintaining the trust of your users. Though we offer the transparency of regular 3rd party audits, the lowest transaction costs of any ERC20 stablecoin, and strong partnerships, users tend to pick the stablecoins they use based on word of mouth and user experience, which includes customer service.”

Gemini Dollar (GUSD) was released on Sept. 10, 2018. According to the developers, the Gemini Dollar is directly pegged to the U.S. dollar. Gemini Dollar is based on the Ethereum blockchain and uses the ERC-20 standard. In terms of the technical component, it does not differ from other cryptocurrencies based on Ether (ETH).

At the launch of the project, neither an initial coin offering nor presale were carried out. The system works on the basis of smart contracts that control the process of issuing tokens. The cryptocurrency code is open and is available for anyone interested to verify. The same applies to smart contracts used in the system.

Gemini Dollar also has no maximum emission limit. The number of tokens in circulation is equal to the stock of U.S. dollars maintained to support the cryptocurrency. The audit is conducted by Trail of Bits, an information security research and development firm, whose report is publicly available. The latest report was published in August 2019.

Related: Stablecoins Backed by Precious Metals — How Do They Work?

In 2012, the U.S. Securities and Exchange Commission registered the blockchain-based Paxos Trust Company, which had received a license from the regulator. The company created the blockchain platform Paxos for cash settlements.

In September 2018, the developers announced the company’s native cryptocurrency, the Paxos Standard (PAX) stablecoin tied specifically to the U.S. dollar. PAX can be exchanged for any other digital asset by using Paxos’s own crypto exchange. itBit.

Because PAX doesn’t have its own blockchain, the tokens are ERC-20 standard tokens based on the Ethereum blockchain. This is why the PAX stablecoin can be saved on any crypto wallet created for the Ethereum platform.

This stablecoin was created for the fast transfer and exchange of fiat money, reducing the costs associated cross-border transactions and fees for money transfers. PAX has no emission limits and new tokens cannot be created through mining.

PAX is controlled by two auditing companies — Withum, which is responsible for monitoring the financial reserves of Paxos, and Nomic Labs, which verifies smart contracts.

Stasis EURS (EURS) is a decentralized stablecoin whose value is pegged to the euro. The accounts are maintained by a company whose offices are located in the European Union. According to the developers, the cryptocurrency was created specifically for institutional investors in Europe. The main objective of the project was the implementation of the concept of stock assets on the blockchain network.

EURS was launched in July 2018 and runs on top of the Ethereum blockchain. The British DSX exchange was the first to support the project. The developers have said that the platform works according to the rules that ensures transparency for investors.

The code of conduct consists of compulsory account statements and quarterly audits by BDO Malta. According to the company, its collateral reserve is managed by a “AAA-rated European institution.”

The CEO of EURS, Gregory Klumov, told Cointelegraph that he decided to create a euro-backed stablecoin after seeing Tether gain traction:

“I always wanted to create some competitor to the US dollar and simplifying the reach for the underlying currency, the Euro, makes a lot of sense macro-wise. US regulators do not segregate digital assets from existing buckets they already regulate (ie commodities, securities, MSBs). But Europe’s regulators treat the asset class more competitively and I foresee that they will adjust existing e-money regulation to include stablecoins. It was developed 20 years ago and is becoming obsolete because of blockchain technology. In my view, stablecoins should be seen as e-money 2.0.”

The cryptocurrency DAI is a stablecoin pegged to the U.S. dollar and was launched in late 2017. This is the internal token of the MakerDAO platform, which maintains and stabilizes DAI’s value with a dynamic system of collateralized debt positions, autonomous feedback mechanisms and external actors having relevant interest.

According to the project’s website, DAI is the first decentralized stablecoin on the Ethereum blockchain. Using external market mechanisms and economic incentives, MakerDAO platform stabilizes the cost of DAI at $1, while full control of the processes on Ethereum eliminates the need to trust centralized organizations and worry about external audits.

DAI’s emission scheme looks like this: The user sends a certain amount of Ether to the smart contract that issues the DAI tokens in return, which means that the newly created DAI tokens actually represent a collateralized debt to MakerDAO.

The main feature of MakerDAO is that the platform uses two tokens — the DAI stablecoin and the utility token Maker (MKR). MKR acts as a kind of “fuel” to pay commissions for using smart contracts. After paying the commission, MKR tokens are burned.

Both tokens DAI and MKR are traded on centralized and decentralized exchanges like Binance and HitBTC. In September 2018, the project attracted $15 million in financing from venture firm Andreessen Horowitz.

Various developers around the world are keeping a close eye on the development of stablecoins as the technology aims to alleviate the shortcomings other, more volatile cryptocurrencies are experiencing. In addition, stablecoins can become an intermediate in the process of replacing the physical money supply with a digital one. According to Rafael Cosman form TrueToken:

“We consider stablecoins to be an integral part of building the financial infrastructure of the future. Our mission is growing economic opportunity for all, and making money easier to access, move, store, and use has always been the first step. It’s not so much a cure for crypto’s volatility, as it is a tool for financial inclusion.”