Bitcoin (BTC) closed the week down almost 6% at $8,500. Altcoins performed slightly better than BTC but collectively also closed lower for the week, down 3.5% against the dollar. Bitcoin dominance remains relatively flat and continues to hold 68% of the total share of the cryptocurrency market.

Monday has brought lower prices on open with Bitcoin down around 0.75% and the rest of the market following suit.

After a slow start to the week, let’s take a closer look at the price action to determine if there is any change of Bitcoin avoiding a fourth red weekly candle, something which has only happened a handful of times previously.

Bitcoin closed the week with price in the middle of the range where it has been trading since September and on the 50% retracement of the whole 2019 move from $3,200 to $14,000.

Weekly support lies at around $7,600, which is also where the 100-week moving average is found, with former support now resistance at $9,550. 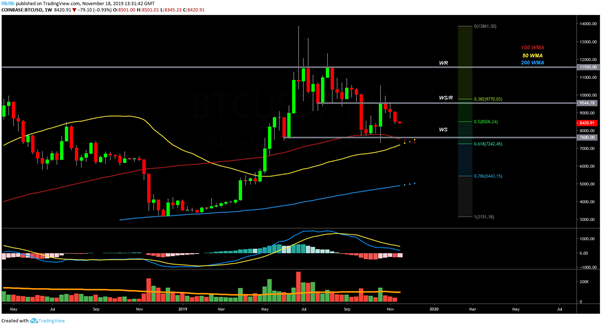 The 100 and 50-week moving averages are rapidly converging to cross bullish for the first week of December, which is usually considered a bullish indicator and has coincided with the start of bullish moves in the past.

Looking at the daily chart we can see that Bitcoin lost the 50-day moving average support meaning that BTC/USD is now trending below all three major daily moving averages, which are bearish. 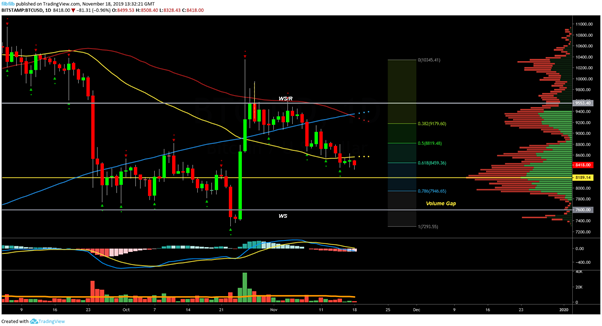 Price is currently resting in the golden pocket, which is between the 61.8 and 65% retracement levels from the highs of the last week of October.

This is usually seen as an attractive entry point for traders. The price is also just resting above the local point of control where most volume has been traded and that appears to be holding up as support

The bearishly crossed MACD with higher lows on the histogram is implicit of decreasing bearish momentum going into the start of the week. This could be an early sign of a pending reversal somewhere above $8K. 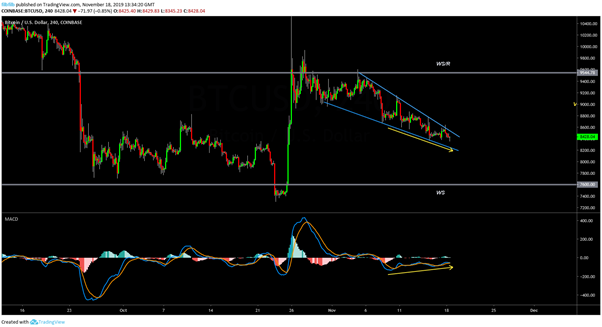 The 4-hour chart highlights that Bitcoin has been trading into a falling wedge, which is typically a bullish pattern that has a success rate of breaking to the upside in around 68% of cases according to Tom Bulkowski who researched the pattern.

A bullish break to the upside would imply a target of around $9,000.

In support of this case, the volume has been dropping as the price has declined, which is also typically a sign that the momentum of the move has subsided and is favoring a reversal.

Additionally, there is a bullish divergence between the MACD and price, with the MACD putting in higher lows as price moves lower.

Therefore, statistically, we should expect to see some sort of reaction by the bulls this week as all the early signs are suggesting that a reversal could occur. On the other hand, a false breakout though would likely see a fast move down to $8K.

The Commodities Futures Trading Commission or CFTC, which regulates the CME, issue a Commitment of Traders (COT) report each Friday that reveals the net position of Retail, Pro and Institution market participants.

As it stands, retail remains bullish; pros are now net bullish; and institutions are decisively bearish on Bitcoin, now hitting new lows on their short positions.

The CME chart overall appears more bearish than the other spot market charts. There have been consecutive weeks where spot markets have seen relief over the weekend, only to suffer downside as the CME market reopens.

It is worth noting that the institutional players were also short at the 2019 bottom, whereas the pros and retail were long. So although the institutions are clearly helping drive price lower, they don’t always get it right. But generally, retail traders are outperformed by the market so their enthusiastic bullishness raises a warning flag. 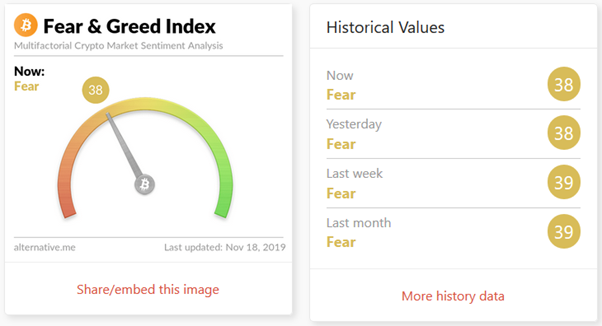 The fear and greed index has historically reacted inversely to the price, i.e. in times of extreme fear, the price has reversed; and vice versa in a period of euphoria.

The current position in the market is that generally, participants are moderately fearful with a rating of 38, which is on par with previous months, which is of concern for those bulls who use this metric to identify the likelihood of a more fundamental trend reversal.

Overall, the market is showing some signs that the bears are losing some momentum on lower time frames. But as a whole, the price action seems to suggest that any bullish reversal may be short-lived and the general trend remains to the downside and likely to result in a retest of $8K.

With key weekly moving averages due to cross in a couple of weeks, it’s likely that volatility is on the way for Bitcoin in the near future.

The views and opinions expressed here are solely those of the author and do not necessarily reflect the views of Cointelegraph. Every investment and trading move involves risk. You should conduct your own research when making a decision.