In many ways, Bitcoin (BTC) and the crypto markets as a whole live somewhat independently from traditional markets. The global crypto space never sleeps, operating at all hours of the day on a global scale.

Traditional market price movements and conditions, however, may still have an impact on Bitcoin. If the economy is healthy, seeing rising prices for traditional market indices such as the S&P 500, it makes sense that people might be more willing to take risks by putting money into Bitcoin, an asset that is still speculative at this point in its history.

Crypto-Twitter has hosted many discussions on Bitcoin’s potential reaction to an overall market recession, which the digital asset has not yet truly seen since its creation in 2009. The jury is still out on how the asset and its surrounding blockchain industry might react to such a scenario.

Comparing Bitcoin’s price with the S&P 500 index over the last two years shows some interesting data.

A major benchmark of traditional finance, the S&P 500, takes the 500 biggest public companies in the United States and averages their stock prices into an index, providing a single price that reflects the overall market performance.

For the most part, over the course of 2018 and 2019, Bitcoin and the S&P 500 acted surprisingly opposite to each other, with the exception of two instances when the two markets seemingly flowed together. 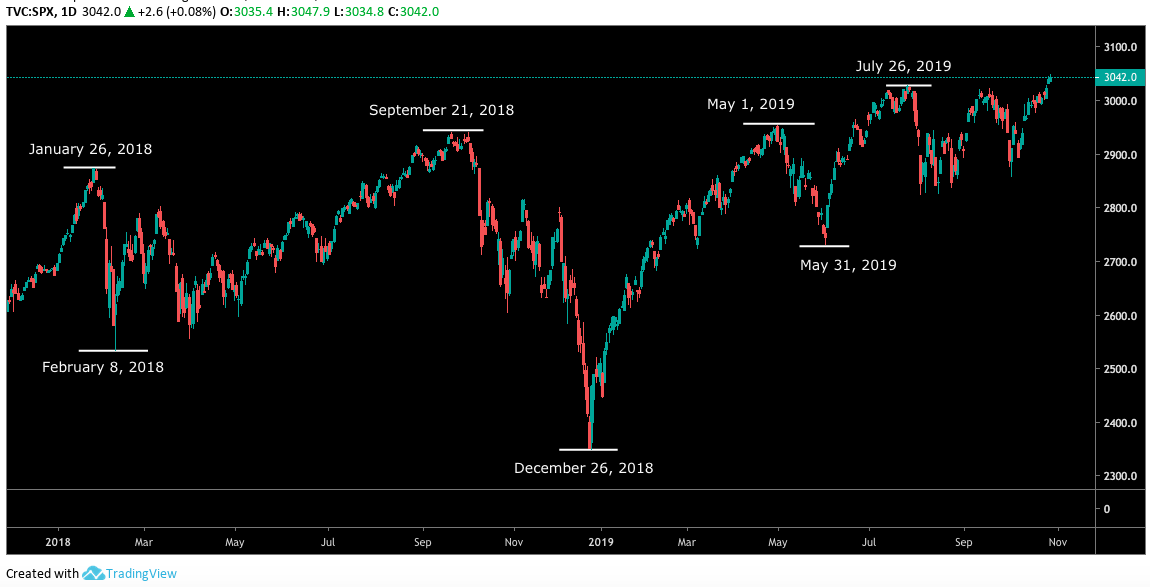 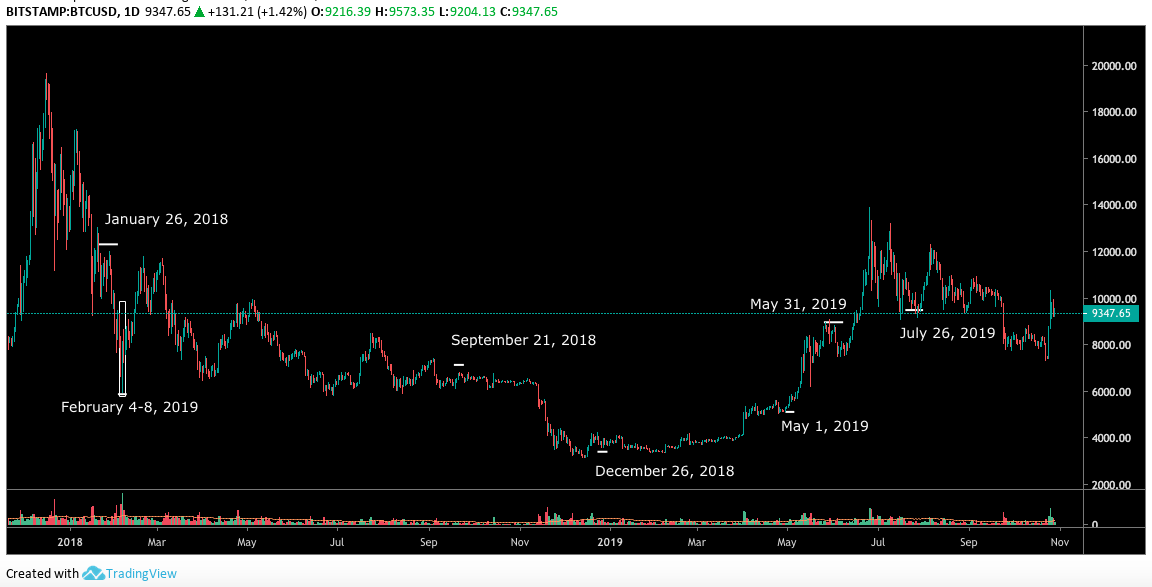 Starting in 2018, between Jan. 26 and Feb. 8, both prices suffered a steep decline before bouncing in similar fashions.

Between February and September, the S&P and Bitcoin rode opposite trends. The traditional market index gradually rose to new all-time highs while crypto’s largest asset trended down, dropping more than 40% between March and September 2018.

On Sept. 21, the S&P hovered around all-time high levels while Bitcoin fluctuated near $6,000 support during a time of low volatility. At this point, Bitcoin was nowhere near its yearly high above $17,000, which the digital asset hit in January 2018.

The S&P saw the bottom of a correctional period around Christmas, which was similar to Bitcoin’s market state this time, although Bitcoin saw a big drop earlier — from $6,000 to nearly $3,000 — in November 2018, and did not bounce with exuberance like the S&P.

Instead, BTC bottomed out with consolidation and low volatility until April 2019.

The S&P was back near its all-time price highs by May 1, 2019. Meanwhile, Bitcoin was in the early stages of its uptrend — a trend that would eventually more than double the digital asset’s price.

During the month of May, the two market products acted strikingly opposite to each other. The S&P faced a rather bold correction, just over 7% to the downside as Bitcoin rose more than 70% in the same time period.

The inverse correlation between continued into July, with the S&P posting new all-time highs once again around July 26, while Bitcoin was consolidating after its 2019 high near $13,900.

This pattern was also displayed in late July as well, with a sharp Bitcoin bounce while the S&P saw a notable decline.

On the whole, since August 2019, the S&P stayed in an upward trend, while Bitcoin has seen an overall downward trend until recently, in what may be the start of a potential bullish reversal.

Is Bitcoin an alternative investment?

Since May 1, 2019, Bitcoin and the S&P 500 have been inversely correlated for the most part, particularly when it comes to sizeable moves. Recently, however, the S&P has hit record levels, coinciding with Bitcoin’s historic 42% daily price gain on Oct. 25 and, therefore, undermining the summer’s reverse correlation patterns.

As Bitcoin is often pitched as a borderless, decentralized and alternative digital asset, it should, in theory, act independently of traditional markets. Buyers of Bitcoin, however, often need cash to pay for Bitcoin, which is ultimately affected by politics and traditional markets, leading to a correlation between the two worlds.

Not everyone buys Bitcoin as a hedge narrative

Bitcoin as a hedge to government currencies and traditional markets is a hot topic these days, particularly in light of the recent economic unrest in countries like Lebanon.

Since May 2019, the charts above show Bitcoin as a potential hedge against the S&P 500, which in many ways represents the overall state of traditional financial markets.

This inverse correlation, however, was not as consistent in 2018. Anthony Pompliano, the co-founder of asset management firm Morgan Creek Digital, has spoken on the topic of Bitcoin as a hedge. In August 2019, Pompliano said:

“Central banks bought more than $15 billion of gold in the first 6 months of the year. They are trying to hedge their risk to the U.S. dollar. Wait till they find out about the non-correlated, asymmetric upside profile of Bitcoin. Every central bank will be buying Bitcoin.”

“Unpopular opinion, Bitcoin won’t make a new high until S&P 500 makes a new high. BTC has been range bound because macro trendless. Confirmed by our Bitcoin Misery Index falling from 66 (50 now). Since 2009, best years for Bitcoin is when S&P 500 >15%.”

Comparing charts from the S&P and Bitcoin shows compelling — but certainly not conclusive — evidence for the Bitcoin hedge narrative. It is also important to consider the many other factors that might affect correlation data, such as central bank policy, inflation, etc.

For example, as Cointelegraph reported earlier this month, the United States Federal Reserve has added $210 billion to the market over the past two months — an amount greater than Bitcoin’s entire market cap of $167 billion — and one that could make deflationary assets such as gold and Bitcoin attractive to investors.

The views and opinions expressed here are solely those of (@benjaminpirus) and do not necessarily reflect the views of Cointelegraph. Every investment and trading move involves risk. You should conduct your own research when making a decision.

What Will Move Crypto Into the Institutional Realm?

Buterin Supports BTC-ETH Mix, as Future of Crypto Is ‘Pluralist’